Connecting to Remote Server via SSH

Secure Shell(SSH) is a network protocol to access a computer remotely over an unsecured network. It also refers to the suite of utilities to implement the SSH protocol.

SSH has a client-server model connecting the client with the server. It also provides SSH File Transfer Protocol (SFTP) for transferring data.

To use the SSH connection, SSH has to be installed on both the server and client. Some popular options are:

This section will show how to install OpenSSH on Linux.

On the client side, SSH client needs to be installed. To check if SSH is already installed, ssh can be entered in the terminal.
If SSH is installed, a response similar to the below will be shown.

Otherwise, OpenSSH client can be installed.

OpenSSH server can then be installed as below.

To ensure OpenSSH server is properly installed, ssh localhost command can be tested again. If the following response is returned, SSH server is installed properly.

To establish a secure client-server connection, public key authentication can be used. It adds cryptographic strength to the SSH security. ssh-keygen is used on the client-side to generate the authentication key pairs.

The public key can be copied to the server using the command below. The public key will be stored in the authorized_key file, allowing the client to establish a connection using the private key.

After the authentication key pair is generated and the public key is copied to the server, the following command can be used to establish an SSH tunnel to the server.

The connection can be closed using exit command.

The following command can connect to the server using the config file.

SSH File Transfer Protocol (SFTP) is a file transfer protocol (FTP) implemented in SSH. It allows a user to transfer files over the SSH tunnel.
Given the public key is stored in the server, the following command can be used to connect to the server using SFTP.

Note that capital P is used for the port parameter and the <username>@<host> is given at the end of the command.

Transfer Files from Server to Client

get command can be used to fetch a file from server to client. The working directories of the server and the client will be used as the source and the destination respectively.

Note that "-r" is used to fetch child files in the directory recursively.

Transfer Files from Client to Server

put command can be used to push a file from client to server.

Remote Development on VS Code via SSH

VS code can be used for remote development using SSH extension. The following steps can be taken to establish an SSH tunnel to the remote server.

Port Forwarding on VS Code

Port forwarding can be done using VS Code to allow the client to open up applications using the forwarded port.
This can be used to access the server's Jupyter Notebook or Airflow web server on the client's browser.

Port forwarding is added in the Remote Explorer from the activity bar. 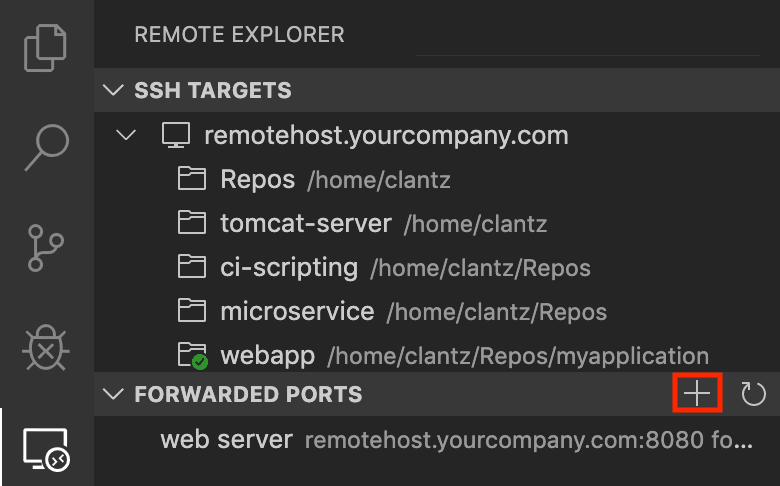